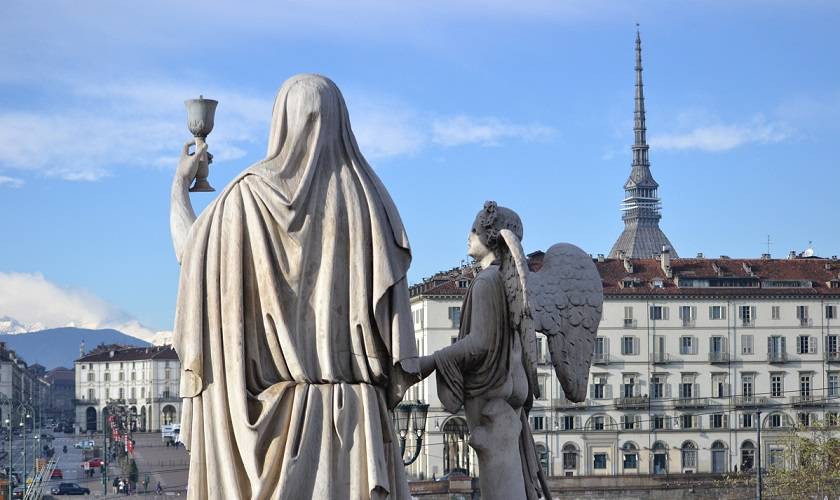 From ”Porta dell'Inferno“ to places of ”Sacro Graal“, the tour of Magic Turin runs among dark secrets, black magic, esotericims and masonry!
Turin is without doubt the most mysterious city all over Italy, with its unsolved mysteries, places provided with supernatural atmosphere and histories about dark celebrities.
According to experts, the piedmontese city should be one of the global Black Magic Triangle vertexes, with London and San Francisco, and one of the White Magic Trinagle, with Lyon and Prague.
For magic lovers, can not be missed a little magic tour during your stay in Turin!
Just a stone’s throw from our hotel, you can find the famous square ”Piazza Statuto“, point of maximum concentration of dark energies where, under the memorial statue of ”Caduti del Frejus“, the ”Porta dell'Inferno“ is located, and the angel on the fountain is Lucifer. Moving in Corso Regina, you can find a place where there was the gallows for public hangings. Arriving in Piazza Castello, historic centre of the city, you can find the epicentre of White Magic, point where all the positive energies were focused: the subsoil in the zone was seat of ”Grotte Alchemiche“, underground caves designated to the transformation of matter and materialization of thought.
Strolling under the porticoes of Via Po, you will reach Piazza Vittorio Veneto, with the Gran Madre di Dio church (inspirated to the Pantheon in Rome). At the side of its staircase, you find two feminine figures, connected to the legend of Santo Graal: one of them holds a bible in her arms and with the other hand raises the cup to the sky. The legend narrates that the statue's look suggest the direction to follow to find the Sacro Graal!
And that's not all, the city hides much other mysteries. Find them out visiting our magical city!